It was a happy happenstance. Earlier in the day, I decided to take the 1st Arrondissement walk in a wonderful book I brought with me:

(This book, by the way, is a fantastic companion for anyone with an interest in Parisian history, architecture, culture. There is a walk for each of the 20 Arrondissements in Paris which is great if you, like me, want to explore them all!)

The 1st, or 1er (for premier – “prem-ee-ay”), Arrondissement is situated in the very heart of Paris: 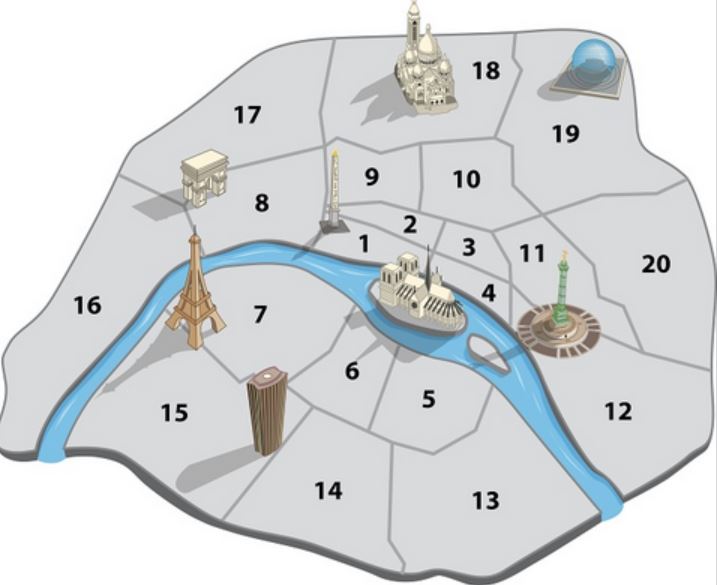 This is where you will find the Louvre, the Tuileries Garden, the Palais Royal, and many other beautiful former palaces of the French aristocracy.

From my starting point on Place des Victoires, 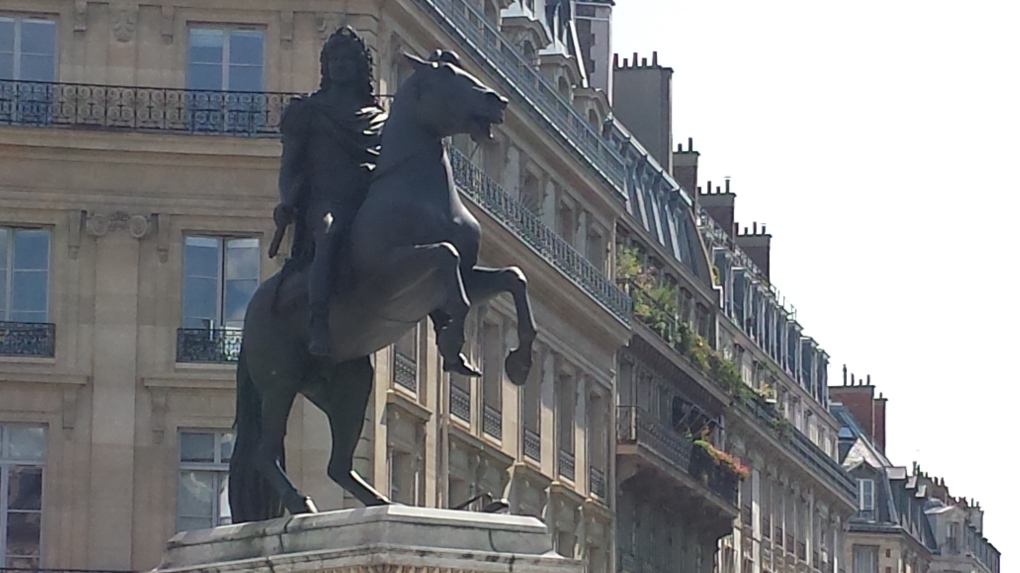 with its bronze statue of Louis XIV, the Sun King (“in coronation clothes, crowned by immortality…” Oh, but I digress…),

I walked a great deal of my current Paris neighborhood. I learned much about the aristocracy and the richly-facaded palaces. (I know, I know, “Let them eat cake” and all that, but thank God a few of theses incredible buildings are left standing!) It was interesting to see how they have been repurposed as, oh, the Banque de France, for instance:

I also saw the reported temporary abode of Charlotte Corday on 17 Rue Herold. Also known as l’ange de l’assassinat – the Angel of Assassination – she is reported to have stabbed and killed Revolutionary leader Jean-Paul Marat while he was taking a bath. For this, she lost her head. Clearly, the two were not friends.

But (with that awkward segue) I introduce my new friend. I had just exited onto Rue Jean-Jacques Rousseau from the Galerie Véro-Dodat (built in 1826 by two butchers who took over and re-vamped the crumbling establishment – I like that story). At the corner of Rue Jean-Jacques Rousseau and Rue du Louvre, a young woman approached me and asked if I knew where a specific shop was “where they sold clothes I cannot afford to buy.” (I wish I’d written down the name of the shop so I, too, could view the extraordinary couture I cannot afford to buy.) I did little to help except direct her to Rue Jean-Jacques Rousseau (we were standing on it, after all). We both recognized our respective American accents and so sprung up a conversation right there on the corner. Turns out, we’re both from California: she, from Los Angeles and I, from the San Francisco Bay area. And, turns out, we had both arrived yesterday. But, as I was going to be visiting multiple countries and had only a few weeks, she was going to be staying for three months! I was happily jealous and told her so.

Lori worked in the entertainment industry in Los Angeles: in entertainment marketing to promote movies and awards ceremonies like the Oscars and such. But she wants to get back into casting or theater, taking a more active role in the creative aspects. “California is great, but there are no true seasons and no real way to mark time. The years pass and you don’t even realize it.” (When she shared that last little bit, my heart jumped at its simple profundity.) In need of a change for awhile, she quit her job and decided to move to Paris for 3 months!

When those three months are over, she’d like to get back into theater production. In fact, her return ticket is straight to New York!

I was so excited for her and the life she’s chosen and the 3-month visit to Paris. While here, she’ll gain a grasp of the French language and people and the culture. She’ll have visited other countries. She’ll be changed. We talked about that and she smiled. “I know. I’m excited,” she said. I wonder how her time in Paris will affect her and the decisions she makes. I wonder what it would do to me had I three glorious months to stay here…

You and I are lucky because she’s just started her own blog, Aventure à Paris. We can follow along and see where life takes her. She’s also got a great Facebook page where she’s creating an awesome album of Paris photos (https://www.facebook.com/lori.nelson.9212).

And, she and I may just have dinner together in a few days before I leave this City of Lights. Perhaps will check out the bistro next to Galerie Vero-Dodat, here in the 1st arrondissement. It is, after all close to where we met.

The 1st Arrondissement of Paris. History, aristocracy, allusions to literature, and the Paris neighborhood where two California girls set out to explore one day, met and became friends.