There was a major 2 1/2-hour delay in San Francisco for maintenance issues which caused another big delay in Frankfurt which meant that instead of arriving in Barcelona mid-morning, it wasn’t clear at all when I would arrive. I was thankful to make it over the Atlantic safely and tried to make the best of perhaps having to  have an extended layover in Frankfurt. (So, what’s in Frankfurt that might be interesting? Frankfurters! This is where they were created, right? I just love frankfurters. I wonder why they’re now mostly called “hot dogs” – something to do with their similarity to dachsunds? But dachsunds aren’t hot! Hmmm…) Anyway, I wanted to stay positive. (Mustard! Germans love mustard! I love mustard! I can have mustard on my frankfurter!) Thankfully, all that pork by-product positivity was blessedly short-lived because I had a plane to catch!

Some notes from my journal:

And, we’re taxiing! When we arrive in Barcelona, I’ll need to make a quick call to my hotel to ensure they’re waiting for me as they expected me much earlier and apparently don’t have consistent front desk service. Oh! Didn’t even realize I’ve got an exit row seat! Woo hoo!

I’ve been snoozing off and on. My neck is a little strained. My seatmates have chatted nonstop in German. But, somehow their conversation has just seemed pleasant and not grating and bothersome at all.

Wasn’t the Lufthansa plane that crashed a little over a month ago as a result of a depressed pilot intentionally flying the plane into the side of a mountain a plane like this? I think it was! The thought just hit me (no pun intended) and I remember the 150 Lufthansa passengers and crew who died. This thought is a lot unsettling as I sit thousands of feet above the earth in what is probably the same kind of aircraft from the same airlines. But, our pilot is not depressed. No. In fact, he’s jolly. A jolly German. His nose is probably red, he’s so jolly. (But it’s not too red – no one would mistake his red nose for that of an, ahem, overimbiber. No. He’s not really that interested in alcohol, at all. In fact, he’s a teetotaller. An undepressed German teetotaller with tons of flying experience. He could probably fly this route in his sleep. Not that he’s sleepy or anything…
We are as safe as we can possibly be. Still, I think I’ll say a little prayer.

Now to find the bus. When I was in email communication with the hotel representative in Barcelona, he said that someone could meet me at the aiport and drive me to the hotel. But when I asked the price, he replied €60. As a solo-traveller, I get hives thinking about paying that amount of money for a ride into town. It would be different if the amount were being split between riders. I asked for another option and he told me the airport shuttle – the Aerobús – could bring me directly to the town center, the Plaça de Catalunya where a short walk would take me to the hotel. The price? €5.90! Hot dog! (I mean…Frankfurter!!!)

So that’s what I did. And, it was great. 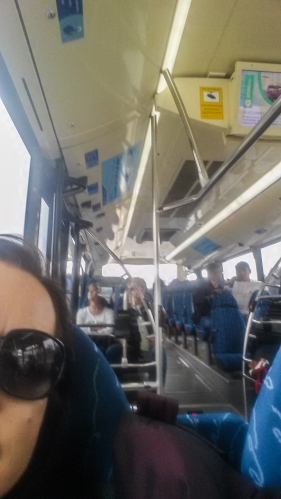 Young couple on the Aerobús 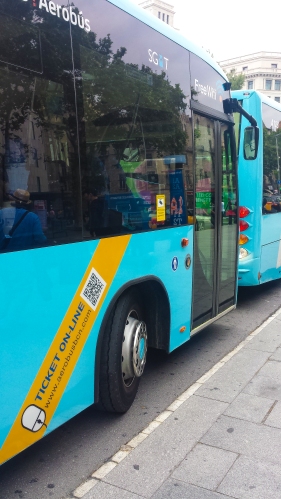 And, when it’s time for me to fly to Paris in a couple days, I’m going to take the Aerobús again. It’s one of the best bargains in Europe!

11 thoughts on “Arrival in Barcelona – Lufthansa A320 and the Aerobus”