Instead of lumping him in with the other admittedly remarkable Egyptian artifacts I viewed, I decided to give the Seated Scribe a post all his own. He deserves it because – his pudginess notwithstanding – he’s a masterpiece. Even though he’s anonymous (we don’t know his name, title, or the exact period in which he lived) he’s still one of the foremost, famous, and recognizable figures in the Department of Egyptian Antiquities at the Louvre. 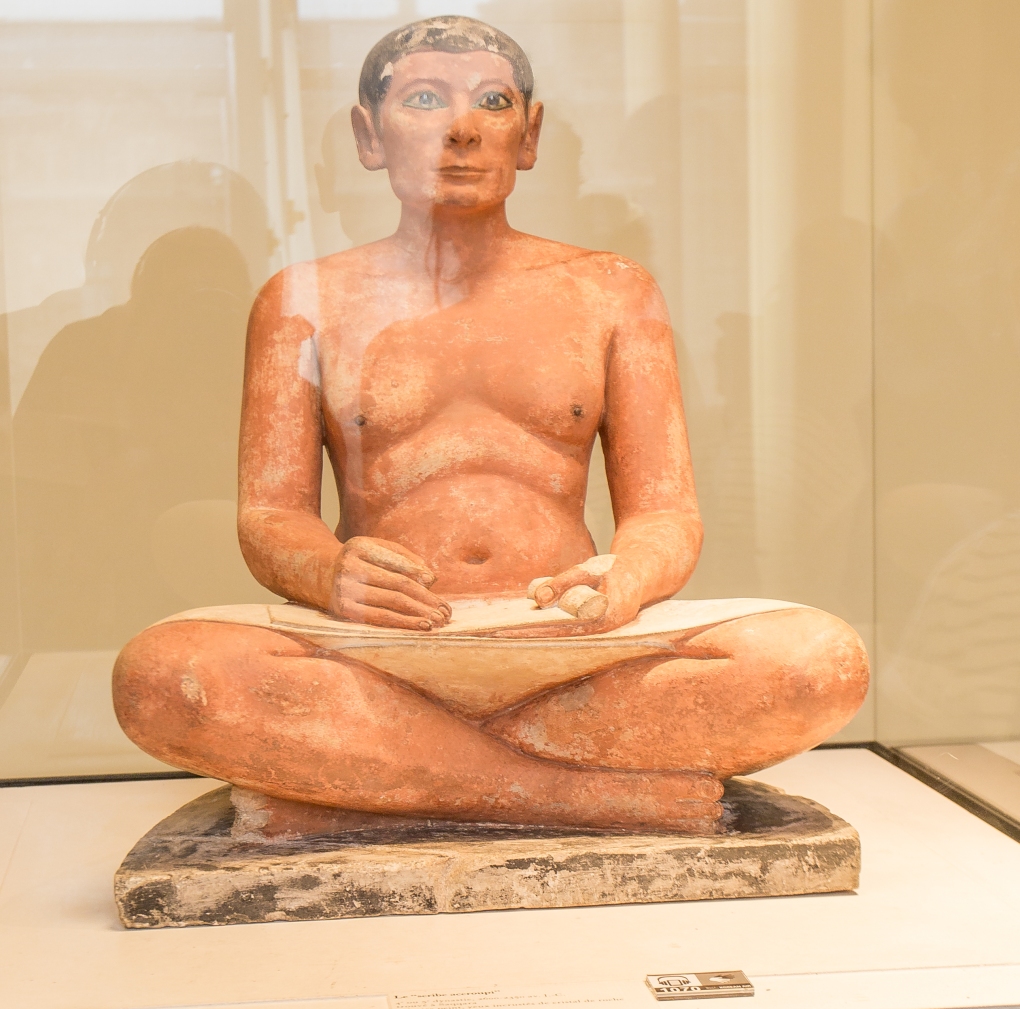 The Seated ScribePainted limestone with rock crystal, magnesite, and copper/arsenic inlay for the eyes and wood for the nipples, found in Saqqara. Dynasty 5, c. 2510-2460 BC.

He sits cross-legged, in the most common posture for scribes. He is not highly-stylized like the pharoanic sculptures with their wigs, lavish clothing, and hieroglyphics. He wears only a simple white kilt which supports his partially-rolled scroll of papyrus. It is obvious that his right hand originally held a reed pen which has long since disappeared.

Pay close attention to his eyes, his most striking feature. (My mom used to say that about me!) Inlaid, they consist of a piece of red-veined white magnesite, in which a piece of rock crystal has been placed. The front part of the crystal was carefully polished. The back side was covered with a layer of organic material, creating the color of the iris and also probably serving as an adhesive. The entire eye was then held in the socket by two large copper clips welded on the back. An off-center hole was drilled in the back of each to give the appearance of the pupil – ingenious! A line of black paint defines the eyebrows.

His cap of hair is cut close to the skull. The hands, fingers, and fingernails are sculpted remarkably realistically. His chest is broad and the nipples are marked by two wooden dowels. The “middle-age spread” of his abdomen might be a mark of his high status and certainly of his sedentary occupation.

Egyptian scribes trained from childhood. We know there were at least some female scribes because a word has been found for them, but generally, of course, most were men. They learned reading, writing, and also arithmetic, algebra, religion, and law. It was a demanding profession but it was not without satisfying rewards as noted in a book of instruction: “Become a scribe so that your limbs remain smooth and your hands soft, and you can wear white and walk like a man standing whom [even] courtiers will greet.” A high-ranking scribe with a reputation as a great scholar could hope to be appointed to one of several “houses of life,” where lay scribes and priestly scribes together copied, compiled, studied, and repaired valuable sacred and scientific texts. These completed texts were places in “houses of books,” some of the earliest known libraries. (I love libraries!)

There’s so much that can be been said – and has been said! – about the Seated Scribe. Some of my favorite sources for more in-depth information (which, really, you will not regret delving into) include:

The Seated Scribe is unusual in its naturalism, lively alertness, and informality, and is magnificent in its preserved detail and in all he has to teach us!

4 thoughts on “The Seated Scribe, Department of Egyptian Antiquities, Louvre”