No, it’s not the original established in 1922 by Sylvia Beach at 12 rue de l’Odéon in the 6th arrondissement, which closed forever in 1940, during the German occupation of Paris. It is not that famed enclave of Ezra Pound, Ernest Hemingway, James Joyce and Ford Madox Ford. But it is a worthy bookstore eventually renamed to honor the original. 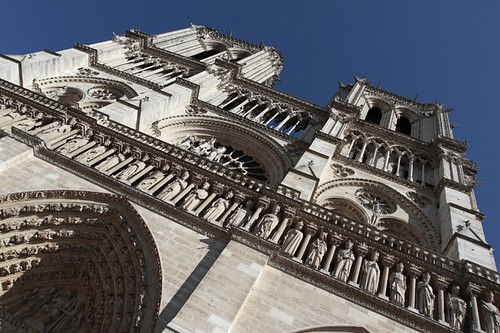 It is Shakespeare & Company and it is situated along the Seine, at 37 rue de la Bûcherie, in the 5th Arrondissement just across from Notre Dame.

“Today, it serves both as a regular bookstore and as a reading library, specializing in English-language literature. The shop was featured in the Richard Linklater film Before Sunset and in the Woody Allen film Midnight in Paris.”

I had spent a considerable amount of the day out in the rain and when I saw this warm, cozy bookstore (which has fascinated me for some time), it was like an oasis in the desert. Or, better, an extremely absorbent, really dry towel.

There was a queue to get in, only a few people at a time. But the outside is welcoming with a bench and writings and used books to peruse.

(Look, there’s even a Wallace Fountain! These fountains are scattered all over Paris and have true and clear drinking water and they are beautiful. I love the story behind their presence here.
Here’s a post by my friend, Brian, which features one of the fountains in the Montmartre area.)

Thankfully, there was a short reprieve from the rain while I queued to enter the bookstore. I was told not to take photos because there is so little room and other customers may find it uncomfortable (but if I could be discreet about it then that would be okay). Upon entering, the heavens spilled forth again, the heaviest downpour of the day. A million snare drums on the roof. I walked in and almost immediately, and unintentionally, began to breathe more deeply than I’m sure I had all day. It was like coming home. (I love books and bookstores and libraries. I love them!) It felt just incredibly right to be there.

I perused the new books downstairs then went upstairs to the children’s section where there are myriad notes written by visitors. I loved these and, careful not to make anyone uncomfortable, snapped a few shots of those that were especially charming:

Down a short hallway on the second level, there was the reading room area, filled with old books, not for sell, but to read, definitely. There were couches and an old typewriter. In one of the rooms off the reading room there was an out-of-tune piano (it said so on a sign, welcoming anyone who wanted to play it anyway). I sat on one of the cushions in the reading room and just…breathed, and smelled, and listened, and watched. The bell towers of Notre Dame, visible from the reading room’s open window, chimed 6 o’clock.

I thought, “Wall-to-ceiling books. Old portraits. This place just bleeds literary history. I may indeed need to read A Moveable Feast again. A young lady of Asian descent studies Rick Steves’ French Phrasebook. The young lady next to me, with blonde hair has matching red jacket and bag. There are old typewriters and a piano both of which are open for use. No photos allowed, though, especially in here. That’s okay. I’ll be able to remember this place just fine, thank you. The fifty-something lady to my right wears wet green and blue Nikes, and a light blue and black plaid denim shirt. She reads The International New York Times. Her scarf, wrapped closely around her neck, is black and red checks. There is a young man crouched into a ball, reading the titles of books on a bottom shelf. I love the musty smell in here.”

In the Children’s Section, I purchased the best book in the world. No, really:

At that point, the store was closing. It had been a wonderful literary, if not moveable, feast!

Here’s a first impression of Shakespeare and Company (Part Two of the post), from my nouvelle ami, Lori.