On entering Cour Khorsabad (ancient Dur-Sharrukin), the courtyard to the Palace of Sargon II in the Department of Near Eastern Antiquities in the Louvre, my jaw dropped. It is an otherworldly place (perhaps because the stone reliefs and monumental figures are from another world). At almost every entrance to this ancient courtyard (cour), housed within the Louvre, I was met by towering lamassu – kindly, powerful spirit guardians of the Palace of Sargon II, the Assyrian king from 722-705 B.C. Although not aggressive, the sheer size and physical presence of these beast-gods with human heads and bulls’ bodies could serve to intimidate any evil-intended man or spirit,…or a mere mortal just visiting the Louvre – like me!

The guardians create an immediate first impression of wonder and veneration. But they also served a practical purpose as support for the arches to the entrance of the palace. In this video by Emma Durrant of Paris Muse Tours, the details of the lamassu’s physical attributes are intriguingly explained:

Moving into the courtyard, further riches unfold and mesmerize. There is the low relief of the dialogue between King Sargon II and his son, Sennacherib. 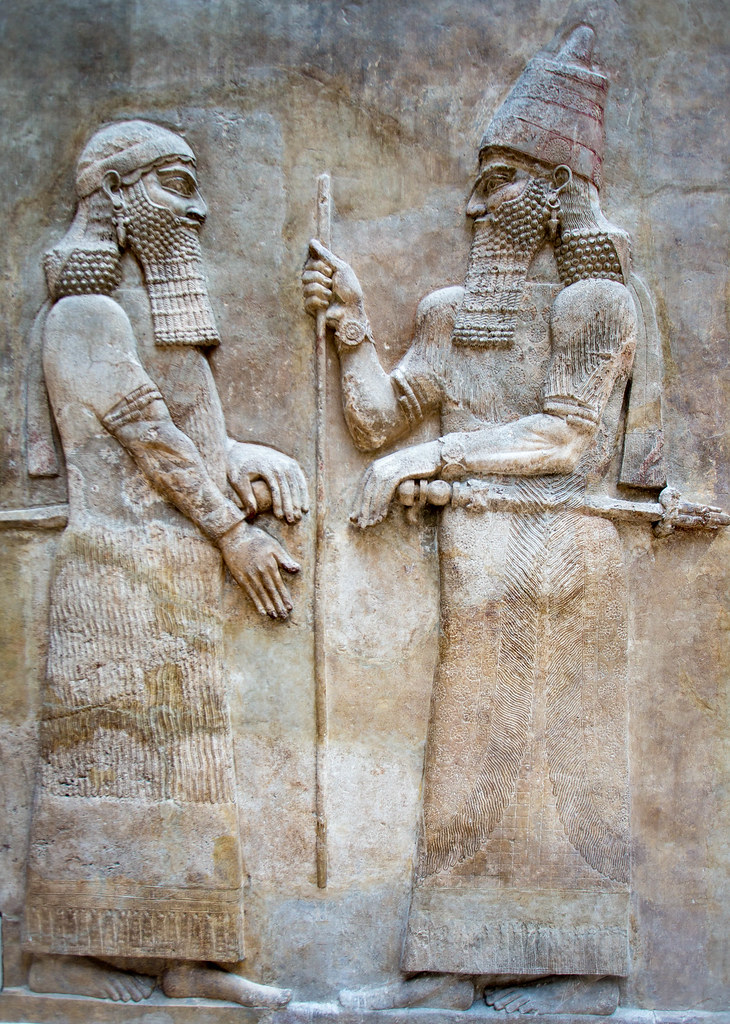 The king is identifiable by his pine cone shaped crown, and the staff of kingship he carries in his right hand. He rests his left arm on a scabbard. Note the elaborate fringe and decoration of Sargon II’s robes which may still show the tell-tale signs of having been painted. On the left stands the crown prince, Sennacherib, wearing a rosette diadem (headband). Note that the king’s and prince’s beards are not only identical to one another but also to those of the lamassu – they are symbolic beards of royalty. (The lamassu also have horns, as explained in the video, which symbolize their divinity. The king and prince are royal; the lamassu are royal and divine.)

There are so many details in the Cour Khorsabad. Following the room clockwise (although I have not included photos here), there are low reliefs featuring servants, a war chariot carrier, and a horse handler. A genius (with wings, hat, and pine cone) and armed warriors in processional formation are next. All face sideways and are in walking stances.

Then, there is the low relief of the “Hero Overpowering a Lion”:

He is one of the two lion-taming spirits found on the facade of  King Sargon II’s throne room. Notice that unlike the soldiers and servants, etc. described before, the hero stands with upper body and head facing us. This posture is very rare in Assyrian art and was only used for depicting magical beings. (I love learning that.) He is quite tall, measuring about 5 meters high and the lion, which he is choking, looks the size of a housecat as it is clenched in the powerful left arm. In his right hand he holds a ceremonial royal weapon with a curved blade, known as a “harpe.” He is wearing a short tunic with a large fringed shawl over it. Unlike the dreamy-eyed Ebih-il, this spirit makes direct eye-contact with us. His head is sculpted almost in the round; the eyes, once brightly colored, were meant to mesmerize the visitor. His hair and beard are styled like those of Assyrian dignitaries and the king. The hero is wearing a bracelet with a rosette in the center. The lion is lifting its head and baring its teeth. Its muzzle is stylized with a series of radiating folds, which are also found on metal sculptures.

This spirit was often identified with the hero Gilgamesh, a legendary figure and actual historical king of Uruk, Mesopotamia, who lived sometime between 2800 and 2500 BC. He is the main character in the Epic of Gilgamesh, a Mesopotamian poem that is considered the first great work of literature. This sculpture symbolizes the power, omnipotence, courage, and effortless ability of a deity-king to overwhelm the strongest of foes, as depicted by the ferocious, snarling lion. The contrast between the roaring lion and the hero’s imperturbable strength is stark. It is an incredibly impressive sculpture, one that stopped me completely in my tracks.

The Cour Khorsabad is now one of my favorite places in the Louvre. While exploring its riches, two adults with a little girl came in accompanied by a guide who explained some of the very special magical creatures in the room. I stood nearby in order to eavesdrop. The little girl gave the guide all of her attention. And, so did I!