I didn’t realize who this eminent historical figure was when I took this photo! He is Amenhotep IV-Akhenaten (the Louvre uses the Greek form of his name, Amenophis), one of the most famous – and unusual – pharaohs of ancient Egypt and also one of the most infamous. For many of us, if we were raised with the Old Testament Bible stories, when we think of “Pharoah,” it is Amenhotep IV-Akhenaten whom we are probably envisioning! (But, the theories regarding the plague and Exodus and Amenhotep IV are long and convoluted and so we’ll leave it at that. Okay, wait, just one thing, well…two things: Did you know that some people think that Akhenaten and Moses were one and the same and that Freud argued that the biblical Moses was an official in the court of Akhenaten??? That definitely adds some intrigue to the Book of Exodus. Interesting…very interesting.)

Okay. Back to the Pharoah. Why the confusing hyphenated name? Well, he changed it from Amenophis to Akhenaten when he became a strict adherent to the monotheistic cult of the god Re, whose visible manifestation on earth was the sun-disk, Aten.

In the fifth year of his reign he moved from Thebes, the city of his predecessors, and built a new capital, Akhetaten (now known as Amarna), in Middle Egypt. From here, he imposed the official religion devoted to the god Re on the people and forbade the worship of the old gods. Historians refer to his reign as the Amarna period.

In the early years of his reign, Amenophis IV ordered the construction of a sanctuary with an immense courtyard with pillars on which stood likenesses of himself. The above photo (the Louvre artifact) is a colossal fragment from one of those pillars and, if we could see all of him, we would note that he holds himself in the regal Osirian pose: standing, legs together, with arms crossed on the chest and a royal scepter in each hand as in the following example.

The Pharaoh himself decreed new stylistic rules for his sculptors to follow. The face is typical of the new, more naturalistic tendency: the features are defined by straight, angular lines and flat surfaces, contrasting with softer, rounded forms. Its elongated shape is accentuated by a false beard that extends down to the chest. (I wonder what they used to get the beard to stick?)

The hieroglyphics do not mention the Pharaoh by name, but refer instead to the god he represented on Earth: “Re-Horakhty appeared on the horizon as Shu, who is in the disk.” This sculptural colossus therefore represents the Pharaoh and his dynasty as the divinely-appointed incarnation of the sun-god.

His wife, Nefertiti, the Great Royal Wife, and child, Tutankhamun, are also famous. (His was a celebrity family of sorts!)

Modern interest in Akhenaten comes partly from his connection with his queen and son, partly from the unique style and high quality of the pictorial arts he patronized, and partly from ongoing interest in the religion he attempted to establish (some believe it was the first monotheistic religion and a precursor to Judaism). 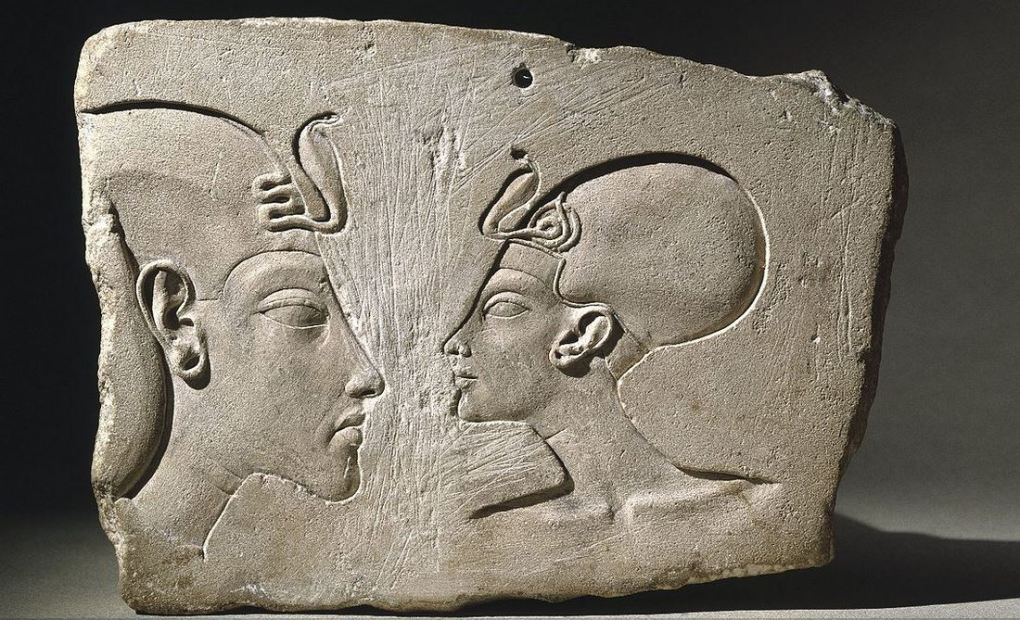 Akhenaten and Nefertiti Late in Their Reign, Brooklyn Museum

The study of King Akhenaten answers many questions and inspires many more!