My emotions run deep and I’m not sure I can explain this very well. There is difficulty starting this post. It’s as if my fingers are tongue-tied. (Finger-tied?)

As I contemplate trying to describe to you my visit to La Sagrada Familia I am reliving the experience and am struck again by its magnitude, on so many levels. I had no idea what I was in for, that any human being could conceive of such a place. It is what I now understand to be quintessential Modernisme: curves, and nature, and big Christian faith, and light, so much light, and colors that glow, as if from on high…

Just a bit of background on the La Sagrada Familia and then I’ll present to you in separate photo galleries the three main areas of the basilica. It was designed by Catalan architect Antoni Gaudí (1852–1926) in the Modernisme or Art Nouveau Catalan style (combining elements of Gothic and Art Nouveau) with a pre-eminent focus on the Holy Family (“La Sagrada Familia”) Gaudí was a man of deep Christian faith. Construction started in 1882 and, although it remains incomplete, it has been designated a UNESCO World Heritage Site. In 2010 Pope Benedict XVI consecrated it as a minor basilica (as opposed to a cathedral which must be the seat of a bishop). It is slated to be completed in 2026, 100 years after the death of Gaudí. He understood that he would not see the completion of the church in his lifetime but he was undeterred, remarking, “My [C]lient is not in a hurry.” Since the advent of computer technology, construction has accelerated and the project which at first was thought to take many centuries will now be completed in about 150 years. And, when completed it will be the tallest church in the world. 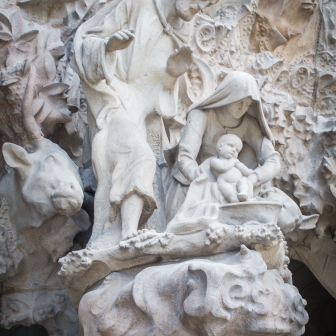 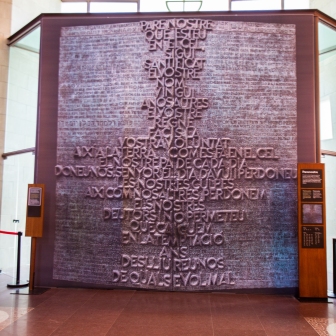 In addition to the ineffable and heavenly interior, Gaudí planned three façades for the exterior: the Nativity façade to the East, the Passion façade to the West, and the Glory façade to the South. The Nativity façade is the first completed and is dedicated to the birth of Jesus with scenes representative of life and change. (Sculptures of chameleons are actually carved into this side of the building!) In literally stark contrast, the Passion façade depicts Christ’s torture and crucifixion. It is deeply evocative. The Glory façade is unfortunately still apartment buildings that have to be bought back for the project to be completed but there is an image of the bronze door inside the church on that side with the Lord’s Prayer in Catalan and “give us this day our daily bread” in 50 languages!

Some tips for your visit to La Sagrada Familia before we move into the photo galleries:

Here are the photo galleries for the Nativity façade, Passion façade, and the interior, respectively.

A visit to this otherworldly basilica evoked for me profound emotion. May your visit be just as memorable.