We freshened up after our arrival from Guatemala City and embarked on the 15-20 minute walk to Parque Central, Antigua’s main square. Stepping out of our hotel that first afternoon, I was immediately struck by Antigua’s uneven cobblestone streets. No, I didn’t fall! But it certainly did take some concentration to keep from tripping and twisting an ankle. But, really, the streets only added to the charm of this lovely colonial city. For weeks before our trip, Jacque had been saying to me, “Mom, you’re going to love Antigua. You’ll love the history and the architecture and the art and the food.” And she was right. My first impression of Antigua was one of sheer delight.

We stuck our noses into shops and I bought a long red, handwoven skirt (which I wore over my jeans the rest of the day).

About two blocks from Parque Central, we came across one of the many cathedral ruins in Antigua. This was Iglesia de San Agustín and, like the others, was permanently damaged after devastating earthquakes hit the area in the 1700s. Dedicated to Saint Augustine, this church remains oddly dignified and beautiful.The belfry’s on the right.

As we searched for a restaurant, we caught a glimpse of El Arco de Santa Catalina, built to allow the nuns from the adjoining church to cross the street without being seen. 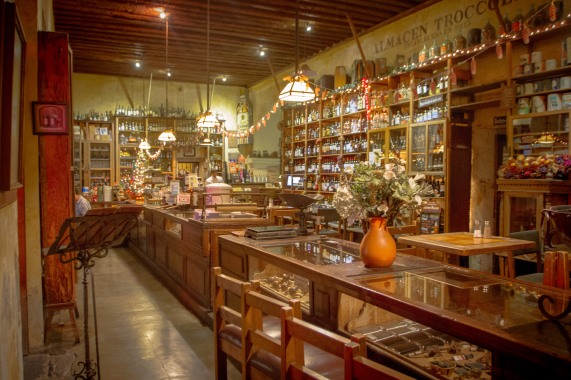 Just a few blocks from the Arch, we found an incredible restaurant, El Sabor del Tiempo, and we both chose the beefsteak (bisteca) dinner.

I had my first Gallo Beer, the beer of Guatemala. There is a very good reason why it holds this esteemed title. Mmmm… 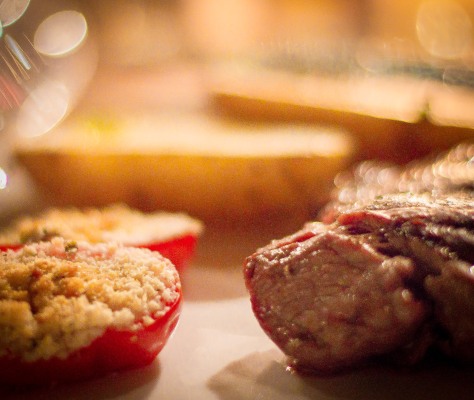 The bisteca was mouth-wateringly good, simply accompanied by oven fries and roasted tomatoes topped with breadcrumbs, which melted in our mouths.

The iceberg lettuce, tomato, and red onion salad with vinegar and oil proved to be the biggest frustration of the day for me (which, after a day of international travel is not so bad, I think) because the lettuce kept falling off the plate when I tried to cut it. Grrr…Jacque saw my frustration and tried mightily not to laugh.

The sun had set and the Parque Central was lit up with lights when we stopped for an after-dinner drink at Chimino’s, a bistro on the square. The beautiful guitar music of Angelo Guzman lured us in. (I purchased his “Guitarra del Mundo” CDs, Volumes I and II)

The greeter, Alex – Alejandro – a Guatemalteco who recently returned to the land of his birth after a number of years living in Pasadena, was a comedian of impressive proportions and kept us quite entertained. He whooped it up with any passerby and had us laughing and laughing.

His talents extended to salsa dancing and he and Jacque lit up the sidewalk! You’ll see a glimpse of our sidewalk table on the right.

After the drink and the dance, we walked along the arched corridor of the Palacio de Ayuntamiento, or City Hall, and hailed a….

Tweet: After the drink & the dance, we hailed a tuk-tuk to take us back to our hotel… http://ctt.ec/m864A+ #Antigua #Guatemala